Yes folks, CORN LIQUOR, Brisbane’s one & only original Hillbilly band is holding their 9th “Tribute to JOHNNY CASH” on the 18th of this month (NOV) at the BOUNDARY HOTEL in WEST END.

This hillbilly yoking 4 piece band has been delivering twanged out tunes from festival to sleazy bar to backyard, up & down the eastern seaboard of Aussie for over a decade, satisfying patrons with riveting versions and original music till all hours of the night.

So do yourself a favour and get down to see and hear some awesome Johnny Cash tunes done in a way that only CORN LIQUOR can deliver…yeehaa…see ya there….. 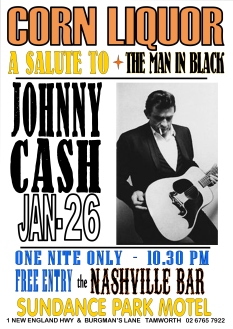 This entry was posted on November 9, 2017 by mollyt333. It was filed under Uncategorized .